While I was on holiday, the rest of the playwrights in the group finished Thus Spake Zarathustra and their various written responses, and next Tuesday we meet to mull over Nietzsche's life and argue over whether he ever really got laid (which will obviously be a pivotal moment in our theatrical intepretation).
I, however, am only up to part 3 of The Z-Man which means the bit where Zara praises winter, goes in hard with various townspeople and their silly other prophet related beliefs, and puts the boot into such things as involuntary bliss and mediocrity.
To these irritations I can't help wishing that Nietzsche had included things like Having One's Toddler Chuck A Tantrum That Lasts For Well Over One Hour and Husband's Uncanny Ability To Keep Reading Newspaper During Said Tantrum.
This last 'irritation' of C's was almost enough to see me collect up every philosophical text in the house and batter him about the head and shoulders in a blind rage, but (despite having lived here for over two years) we still don't have a reliable book cataloguing system in place and it would take me too long to amass such texts into anything solid enough to be capable of violence.
The exception to the book cataloguing disaster is (of course) my precious collection of Books Of My Childhood and frankly the energy I'd be forced to expend to draw blood with my paperback copies of (say) The Borrowers series just wouldn't be worth it.
In the land of the man with the ridiculous moustache I can report that the mountain motif is getting a steady workout, I've just read a gory bit about a shepherd with a snake caught in his mouth, there's some mad dwarf action, and I just know it's all going to end badly, what with it being so based on the writer's experiences and him dying insane and from syphilis. (Or was it a brain tumour? See, the getting laid question is important after all.)
Alain de Botton talks about Fred and his writings in The Consolations Of Philosophy which I started reading to help understand more about Nietzsche and have continued to read to learn more about myself. It may well be Philosophy Lite but it's all I can handle right now and frankly any insight, even if it's simply that drinking hemlock is a health hazard, is a bonus.
Alain de Botton's version of Nietzsche tells me (I still don't have a fucking clue what Zarathustra is saying) that all these difficulties are necessary, that we must keep climbing the mountain to achieve worthwhile happiness (as opposed to that lightweight involuntary bliss) and that we should allow that lofty inspirational joyous things can and mostly do develop from base moments and urges and actions.
So I try not to get depressed about having to go back to the beginning with my tv script draft, I try to see that it's ok to have failed to get it right so far, that in failing and starting again I am learning to get it right.
And I try not to give up on actually reading Zarathustra, being so far behind the others, and wishing I could fling it out the window and do some comfort reading instead.
And I try very hard not to get down about Tricky being so upset and out of sorts since our holiday return, his screaming and hitting and his furious face clawing (have I mentioned the furious face clawing? No? That would be because it upsets me then.) and just keep on doing the best I can with him, speaking calmly and putting him down when he claws or hits me and loving him with all my heart.
And that keeping on loving thing goes the same for his father too, even when we seem to be emotional strangers who happen to be sharing a bathroom sometimes, because we are after all, both climbing this particular mountain, this parenting mountain and I know how hard it is for me and therefore how hard it is for him too.
We both feel tired and old and angry at times, we both have disappointments and challenges in our work that knock us down, we both feel helpless and stupid and useless when Tricky cries for an hour and can't seem to be calmed.
We may not always understand each other, all the time, we may feel tired, old, angry and completely fucked in general but we're still climbing, together, and hey there's something in that.
And so often it's more.
And it's not all climbing, I keep reminding myself.
Sometimes it's stopping and breathing deep and admiring the view. 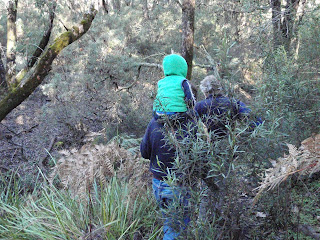 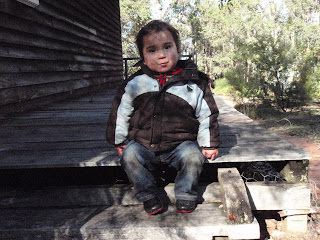 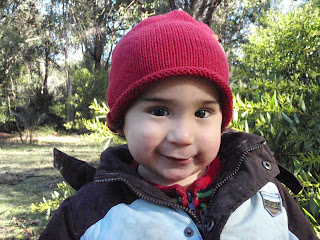 I'm sorry for your struggles with Tricky. Toddlers can behave in ways that at times scare us Moms. Mine did. They've come through it. You know you're both climbing; you'll get to the top together when it's MOSTLY about breathing and enjoying the view-- the view is your grandchildren. My Grand Son behaved A LOT like you describe Tricky's recent behavior. I worried a lot. He's three now and not behaving like that at all. take Care

You are a very wise woman, and in addition you write beautifully and hilariously, and almost always your blogs strike a note of recognition in me which is enormously comforting.

As for the travel-with-toddler experience, I was advised to take my (nearly two-year-old) toddler's car seat on the plane so that he could travel in something familiar and in which he was accustomed to falling asleep. I was also advised to dose him judiciously with Calpol so that he would sleep easily. I have just returned today with my son to the UK from visiting my (Forces) husband in the Falkland Islands, a trip of some 8,000 miles that normally takes about 22 hours door-to-door (we live in Scotland) but which this time took 48 hours from check-in to flinging myself weeping with relief onto the shoulder of my best friend who picked us up at the airport. I put my son's successful navigation of seemingly endless delays, long flights, refuelling stops, bus transits, etc, with only one major tantrum in the departure lounge, down to that advice, as well as to books and the snacks and new toys which have been suggested elsewhere in your blog. However, I shall be trying to avoid long trips until my son is at least 30, as I don't think my nerves would stand another journey like that.

Oh what a little charmer!
I remember my youngest leaping on my back in a rage and attempting with all the strength in her tiny hands to strangle me. When that failed, she beat me around the head and shoulders with amazing strength till one of us fell over with exhaustion! (not sure which)
She's now a loving and self disciplined mother. And a gentle and loving daughter. I've no idea how that happened because she's clearly the same person. Weird!

Your last post of the airport adventure made me queasy. Zoey has crazy rage at least once a week and she's only six months... what the hell is going to happen when she is Tricky's age??

This post resonates with me as well...especially today, a Friday (after a horribly long, long week).

You know how much I know about childcare, so I won't offer any advice, but as for coping with it I can offer some sympathy - a nice cup of tea and a piece of cake are winging their way to you right now!

I'm amazed that Tricky can keep going with a tantrum for an hour, it must take an amazing amount of energy to do that. But then again kids are just plain amazing with what they can manage - where did all that boundless energy go to as we grew up?

Love the pics, and I hope that you are sat back enjoying the view right now!

I look at those pictures of Master Tricky and can only come to one conclusion: you are telling untruths. HE IS TOO DARLING and CUTE and could not possibly (ahem) create mayhem anywhere. From 8 billion miles away, I am quite sure of that.

Yes thankyou all for tea and sympathy! Lin is absolutely right, the child in the pictures was not the child having the hour long tanty (it was actually over an hour, I was clock watching, although it wasn't an hour of trying to hit me and shouting at me it also included lying on the floor and wailing)...and in fact the very morning after this hidious event(I like Spanglish's term 'crazy rage') he was in bed with us snuggling quietly and gently kissing our faces. So you know...swings and roundabouts and I agree he should Rock On (although I have now cut his fingernails)
Anon...you poor thing that sounds like a hellish journey, ours was only 5 hrs in the air...

As mother to an 18-month-old face gripper I agree that the non-clawing moments are worth waiting for :)

Also, my dad actually has devoted much of his life to Nietzsche study - and although I have neglected to ever read more than one of his books, the cover of the one I did read might shed some light on your pivotal discussion... The book is about his close friendship with Paul Ree, and in turn THEIR close friendship with a young philosopher woman, Lou Salome. Of course it all ended badly, but before that the three of them did happen to pop into a photography studio one summer's day and have their pic taken with Lou holding a floral whip...

The photo is on the book cover - see http://www.amazon.com/Nietzsche-Ree-Friendship-Robin-Small/dp/0199278075/ref=sr_1_1?ie=UTF8&s=books&qid=1216014341&sr=8-1 - and the book is actually chatty and readable but more likely to be spotted at a university library than a corner bookstore.

see somehow I just knew the internets would come through for me...waft on about Nietzsche and eventually, somewhere, sometime, someone will read you and will KNOW. I am so checking out that book and also bringing it up and Tuesday's meeting sc, thankyou. And yes I've seen that photo intriguing, no?

Ah yes, dramatic tantrums, something my number 2 is quite good at. Sometimes it's difficult to tell whether he screams more when we try to pick him up and soothe him or when we leave him on the floor. I confess: I take him to his room and close the door (to dampen down the sound) and leave him for 5-10 minutes or however long it takes for the intensity to die down a bit, then I make a cautious approach. If he is willing, we are then able to have a cuddle and it's soon over. If not, I leave him a bit longer and try again. I think toddlers need to let off a bit of steam sometimes, after all it must be very frustrating at times, they're still unable to do certain things or express themselves fully. But it's horrible for us, that terrible mix of horror (the screams, the hitting, the struggling), guilt (is it me?) and tiredness (ever present). Don't despair, you are not alone!