There’s already a lot of stuff in the cybersphere about Emil, he created an extraordinary body of work over the past years. He exhibited in Australia and internationally, he curated, published, produced, photographed, documented,video-ed and basically lived a great life. He received an Australia Council residency for Seoul a few years back and he adored the place, there was no better place or time for making art and making friends-  possibly his two biggest skills-and the one went with the other, hand in hand.

It is the making friends bit I want to celebrate here because everyone who knew Emil became a friend. Years ago I remember laughing that you couldn’t walk across Newcastle's Hunter Street Mall with Emil in under an hour – so many people would stop to chat with him. That was indeed years ago, before '94 when we still lived in Newcastle - but I bet people said the same thing about Emil in Seoul, London, Hong Kong, Melbourne, Sydney… 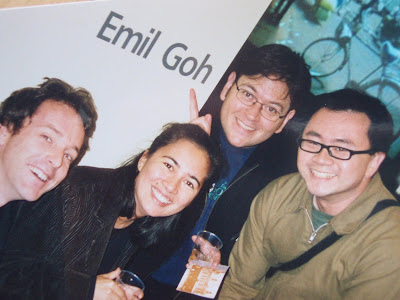 We met when we were both at Newcastle University, in the early 90's, and we clicked, apart from anything else because we had both lived in Malaysia (he was Malaysian and I was a RAAF brat) and we both loved the Nonya food. We could drool together over memories of makan cart banana fritters, peanut pancakes and char keoay teow although when it came to the shaved ice desserts, laced with coloured sugar syrup, evaporated milk and various beans, he was on his own. Emil loved these frozen confections, I loathed them.

It wasn’t specifically Malaysian food, we decided once to do a project together about the best cafes in Newcastle; I would write the articles, Em would do the portraits. We never finished, but we drank a lot of free coffee and Em took a lot of shots of me in my black and white REMO shirt. And that was another thing he loved back in the early 90s: the REMO store near Taylor’s Square. And Seinfeld. He loved Seinfeld.

In 1994, the year my mother died, Emil and I were very close. I was attending the NIDA playwrights studio in Sydney and used to bunk on his couch in Commonwealth Street, Surry Hills, once a week. When Emil and his girlfriend broke up and my marriage broke up we were kind to each other and solicitous in the way that good mates are, both concerned about the other without sounding too concerned. Two other friends going through sad, strange breakups of their own joined us and there was this period of caring, bitter, unhappy yet happy companionship that we shared. I seem to think we drank a lot at that time but then probably not, because I don’t really remember Emil drinking more than a glass at openings. But I do remember the food.

The food and the art.

And Emil was always making art. Different kinds of photographs, playing with lomography and those funny plastic split lens cameras that let you take 4 shots in one. More than that, hanging out with Em involved holding equipment, recording a script or posing for him. You could be asked to sing an aria or run on the spot in the half light while his camera clicked and whirred, or just 'be yourself'. 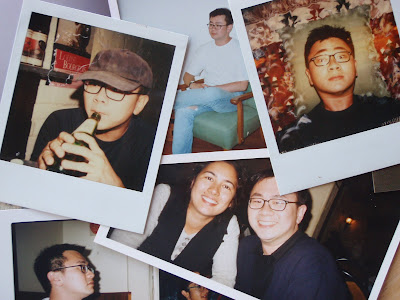 When I moved to Sydney with my new partner C, Emil was at art college and living in a share house in Glebe. And in quick succession I remember him taking us to a series of great food places we had never been before: Barbeque King in Chinatown, Vietnamese in Marrickville, Frank’s Pizza on Parramatta Road, Prasits on Crown Street, Sailors Thai in the Rocks, Singapore Gourmet in Newtown (authentic char keoay teow at last!)  He took us and he took other friends and friends of friends, if you ate more than once with Emil you were pretty much a friend for life. These were all places we would return to again and again until finally we would forget that Emil had taken us there first, they would seem so ingrained in our Sydney lifestyles, we would bring new friends and enjoy their first-time enjoyment. We went with Emil to Tropfest for the first time, to night clubs in the Cross for the first time, to tiny galleries and night noodle markets and Sydney Festival events. It was all new, it was all exciting. Somehow Emil had discovered these things, these things to enjoy and now he was sharing them.

Singapore Gourmet was a tiny, grotty little place on King Street, unassuming, drab but inside such culinary delight! Emil became such a valued customer he had one of his birthday parties there; we had the place to ourselves. We arrived early so we could help him cover the window and tables with butchers paper and then the dishes began emerging from the kitchen… the tables were decorated with tea lights, glowing through simple lanterns of tracing paper with photocopied images of his childhood - his mother, his father, a tiny spiky haired toddler Emil on the sand. These were prototypes for creative works but until perfected they provided a beautiful, quirky and very Emil-like accompaniment to what was already a fabulously unusual birthday feast. 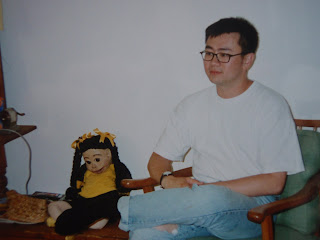 Then there was the infamous yum cha mornings. Enormous tables of people gathered under his instruction, to eat dumplings, to drink tea, to enjoy life. We would meet these people and then would see them again and again around the lazy susan, blinking the sleep from our eyes and clacking our chopsticks. Emil was strict, there were rules; be at the restaurant at 11am sharp or forget it, that’s when you have yum cha, it’s not lunch! Don’t poke at the food with your chopsticks! Turn the teapot lid over when the tea is gone… I got into big trouble from him when I confused the staff at our favourite restaurant, putting a fifty dollar bill on the table and then waiting for change. No, it wasn’t meant to be a massive tip! Cross waiters made Emil unhappy. It meant finding a new yum cha restaurant…

The yum cha/dim sum love wasn’t all about the food. He bought a dim sum trolley back to Australia with him…and made it into art, an enormous gleaming silver trolley with bamboo steamer baskets towering up to the ceiling.

We did an art piece with him when he was still living in Glebe. C and I recorded a telephone conversation and our friend Helen recorded an aria. The audience, each person clutching a portable radio to their ear, trooped after Emil as he led them along Bridge Road past his house. Along the way they stopped on a corner to watch and listen as C lurked in a phone box and attempted to lip synch his end of the conversation into the receiver. After some sort of dramatic gesture he sped from the box to become another character doing something else. I’m not sure what it was exactly because I was poised between a desklamp and the closed blinds, ready to throw open my arms and lipsynch to Helen’s aria as the audience trotted past, peering up at the window, their ears full of soprano magic.

It was fun, making art with Emil. It was always fun. And thinking back to those times it reminds me that making art should be fun. Should be joyous. Sometimes when I’m crushed down by deadlines or rejection letters or my own insecurities it doesn’t seem like very much fun at all. And that's not very Emil of me.

He came and stayed with us in Sydney, he and his Melbourne artist girlfriend, sleeping on the loungeroom floor of our one bedroom flat.

He came to my family home in Newcastle for Christmas and swam in the pool with my younger sisters. They called him “Emil Emil Orange Peel!”

For a few years we emailed sporadically, somewhere in there he went to Hong Kong, he spent time in Europe. C and I were having our own dramas, I was diagnosed with MS and suddenly I was on a strict diet and then we struggled to have a baby and went on an even stricter one. The days of Peking Duck to celebrate Chinese New Year or Frank's gelato or any other food adventuring with Emil seemed a long, long way away.

Emil went to Seoul on his Australia Council residency and then he stayed and stayed.

Where’s Emil? We would meet former yum cha compadres in cafes and Chinese restaurants. What’s the latest? Have you heard?

It was nice hearing from him, it helped get my mind off the sad realities of infertility and then, when I was finally pregnant I emailed him the good news at fourteen weeks and then included him in my bog-standard I HAVE BIRTHED!!! email announcing my new son, five months later. (Yes, he did come early.)

Emil met up with mutual friends in Hong Kong, he met new friends, friends of ours when they went to Seoul for the first time and he showed them a good time as he showed everyone a good time, because Emil almost always had a good time.

He loved life. He laughed lots. But we missed him when he was back in Sydney, I'm sorry!!!! he exclaimed in his email. And he never met up with us again.

I’m still processing this loss of this dear friend, this talented artist, this lovely lovely man who was always smiling and fun and who delighted in meeting people and showing people around.

I regret not staying more in touch with him, not making more of an effort to see him when he was in town. But we always say this whenever anyone we care about dies. I should have…

What I do take solace in is Emil’s ability to live life to the fullest, to find the art in everything. The fun in everything. More than anyone else I know Emil knew how to maintain his curiosity, his sense of humour, his generosity of spirit. He was a great host, either in his own kitchen or the streets of a new city, he would take you under his wing, he would show you things. He adored popular culture, kitch, retro – he always seemed ahead of the pack, he found things first, shared them and then moved onto the next discovery.

In the report I read of his death, he was with his girlfriend. And that made me happier. That he wasn’t alone, that he loved someone and that someone loved him back.

But then, we all loved Emil.

And the world seems darker, less fun, and certainly much less tasty without him. 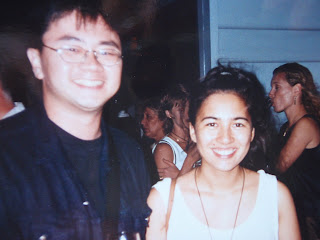 Diary Of A Really Prissy Teenager

For various reasons I have dug up my high school diary.
It is a truly frightening document that begins at age 12 with the words:
"A few days ago I met v down at the Hostie. She seemed delighted to see me and told me that I was invited to her party. It was to be from 7.30 to 11.30 and C was coming too.
Judging from V's past social experience, I'd say there were boys coming..."
and ends at 17, the night before the HSC exams, with:
"Who's afraid of V Woolf?"
and in between: sheer undiluted ghastliness.
I love  it!
Anyone else want to share?
Posted by OvaGirl at 1:44 PM 9 comments: