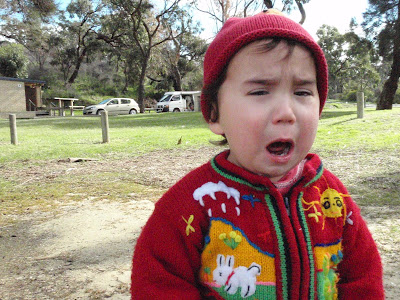 He looked like this. But at an airport. And screamier. And more tomatoey...

We made it home intact but it was a very near thing. The cracking point came, funnily enough, at the very end of our journey as we waited for our luggage to be delivered via 'carousel'.


As I waited with Tricky by our small mountain of hand luggage I had the brilliant idea of amusing my over-tired, over-sensitive toddler with a couple of blown up balloons.


Yes, I'm one of those organised clever mothers who tuck little toys and balloons into their handbag for just such a moment when one's child needs distraction. So there I was, blowing up balloons (not too large) and tying knots in the end and trying to explain why there were no red balloons left, only yellow and blue.


Cut to...balloon suddenly being blown away and drifting down one end of the airport with my toddler in hot pursuit as I stood by the small mountain of hand luggage and my husband waited up the other end of the terminal for our larger mountain of proper luggage.

And, call me stupid (because I certainly did) but I expected Tricky to get the balloon and come straight back to me.


But he didn't. Because he is not quite two. And he had been restrained in a small space for five hours.


And I had to leave the hand luggage, all the computers and cameras and brand new portable dvd player and leg it after him and then when I caught him and started heaving him back to the seat because god forbid he should happily walk hand in hand with his MOTHER, he let go of the balloon and started screaming the place down.

It is gone I shouted. Let it go. I will blow up another one.


It dawned on me eventually that this was not quite the thing to be shouting in the middle of Sydney Airport. And it didn't work anyway. It didn't matter that I had a fistful of yellow balloons in readiness.

He wanted the one that drifted away past the airport security guy who sternly ignored it.

He wanted the one that drifted past the backpackers who tried to kick it as it went by.

He wanted the one that drifted past the family, who saw my loudly shrieking little boy and failed to put two and two together so that when they finally saw the yellow balloon and the woman picked it up she handed it to her little girl as they disappeared through the doors.

Another yellow balloon hastily blown up and return of C with luggage. Now we had to make it onto a taxi. With a child seat. The taxi queue guy took pity on us and called us forward through the crowd that had suddenly appeared alongside us.

Tricky dropped the balloon and it sailed back into the airport.

Korean tourist retrieves it and carries it out to us.

Amidst new screaming hell, not so cheerful husband drags back all baggage to say that taxi at front has no child seat.

Delightful blonde woman from taxi queue leaves own bags to get balloon and hand it back to us. Mother weeps openly.

Enormous semi trailer type taxi appears, seemingly from clouds. It has child seat. We get home and fall gratefully in front of takeaway chicken curry.

Tricky wakes at screamy ten minute intervals during the night.

"I will blow up another one!"

I wonder if i can use that excuse in 12 years time when Lil'Mooey is going through the terrible teens.

You've done it again and made me laugh at my desk on a dreary morning.

Just reading this made me exhausted.

I did laugh though - I guess I'll get my come uppance soon enough.

I'm sorry, so very sorry; but I've been laughing through your entire post. So hard my grand daughter sabby wonders what's wrong with Gran. I'm glad you're home safe and sane. Thank you for sharing your "moment" and making me glad I'm 56.

Welcome home! Doesn't your own bed feel like a luxury?

Sorry, too funny, but then again... I am travelling with my 2 and 4 year old boys in 6 weeks. We are taking a total of 8 flights over 4 weeks. Notes to self: accept double G&T from stewardess; take balloons with string to tie to children or none at all; minimise luggage; try to get broken portable DVD player fixed now; do not forget/lose favourite toys; take a deep, deep breath.

OG I am crying for you, it must have been just awful, not entirely sure how you managed to get out the other side in one piece! Next time I see a screaming toddler I will view the whole situation with a greater sense of respect and awe for the poor parents that have to deal with the situation!

Note to self - if yellow balloon drifts past in airport, look for screaming toddler!