Now We Are Three (and on antibiotics) 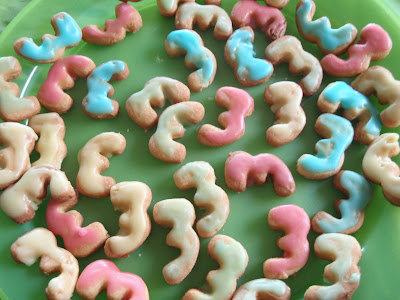 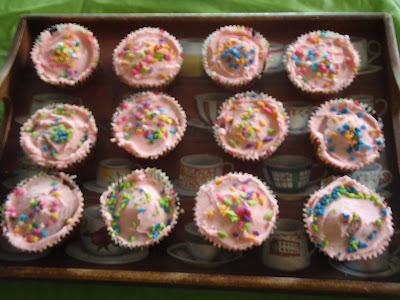 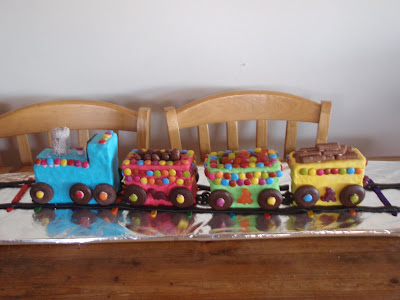 Possibly all birthday cakes.
Possibly, when we are 4, he will get a birthday pikelet.
Drink copious amounts of wine with parents in law, husband and sister in law, all of whom are working and drinking steadily in effort to get cake decently iced and decorated.
Mission accomplished before midnight.
Day of party. Festivities start at 11am. Panic starts earlier. Suddenly list of tasks for morning seems enormous. In good news, the celeriac has been grated. But in bad news the thawing mince is revealed to be TOTALLY STINKING. Husband despatched to buy more mince. Note that even at this late stage he is not despatched to buy FROZEN SAUSAGE ROLLS.
Arriving guests. Luckily there are only a handful. Because this guest has gall to be on time she is given chores to do. Mince returns and through serious Kitchen Wizardry is mixed into puff pastry and tucked into oven. And we all know that if the sausage rolls are cooking then all will be right with the world. Sister in law whips out enormous platters of sandwiches all minus crusts.
Around this time things start getting slightly fuzzy for me. Yet I have not even cracked open one of the bottles of champagne. Hmmm.
Guests arrive. There seem to be hundreds of adults. There are 5 guest children.
Pass The Parcel is played. I have bowed to pressure from every other parent on earth and slipped a chocolate frog between every layer of paper so all participants will, bah humbug, win a prize.
Much shrieking, laughter, screaming and running up and down stairs. Meanwhile, children play on trampoline and assorted pedal car things and trampoline.
Food eaten. Cupcakes have pink icing eaten off top. Number three biscuits seemingly inhaled. Sausage rolls proclaimed great success. Adults manage to fight off anyone under two feet and scoff lot.
Children are as angels and play so nicely parents end up staying. Brother in law makes loaves and fishes type pasta and manages to feed entire group, despite fact he has just come off 3 weeks of shooting still photographs on film set.
Everyone collapses when last guest leaves at 8ish. I manage to finally recall that there are luckydips to go with the party bags as the last child leaves.
Think that he is three. Imagine many more birthdays to come. Imagine making number 4 biscuits and then number 5 etc etc. Remember woman in toyshop saying that we were "brave" having a birthday party at home. recall self scoffing at the very idea of having a party at a commercial venue. Feel very ordinary. Put self to bed.
Afterwards there is probably one or two day's grace before flu hits and what a corker it is too. Culminates with sad scene of Myself, Tricky and C at the local doctor's in "family" appointment. Not swine flu, something much less famous. We leave with various antibiotics for various secondary type lung and ear infections (having antibiotics for flu being, of course, pointless, as flu is a virus) and I get a delightfully quaint purple puffer to help knock over a horrible prolapse inducing (well that's what it feels like)spasmodic cough.
Purple puffer will work in a week maybe but on the other hand, can also cause mouth thrush. Hoorah. Only good thing is that I have had my alcohol free 'dry july' after all. Well for a week at least.
And Tricky had a simply marvelous party.
Posted by OvaGirl at 5:00 PM 14 comments: