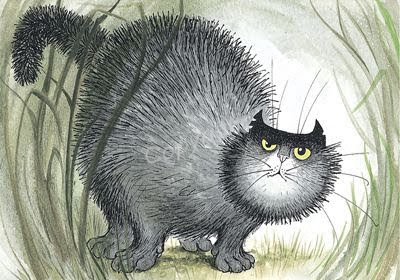 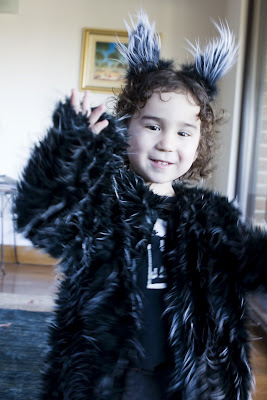 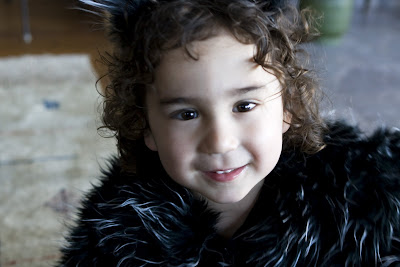 Where The Wild Things Buy Their Book Week Costumes 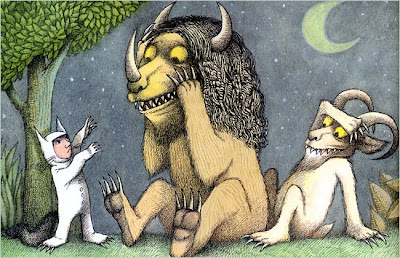 Today, these words caused my heart to leap into my throat:
ON MONDAY AND FRIDAY THE CHILDREN CAN COME DRESSED UP AS THEIR FAVORITE BOOK CHARACTER
I am quoting above from Tricky's preschool newsletter which I will of course use in scrapbookish fashion or at very least keep shoved in memorial shoebox because it is our VERY FIRST PRESCHOOL NEWSLETTER EVER.
In years to come we will look back with warm hearts and moistened eyes to see that one of the teachers is having a holiday! Lucky her! And, soon it will be Father and Grandfather's morning! Welcome all old blokes related to students! And, A Very Special Thankyou to the Mother who donated two CDs! No one likes a smug miss.
But, it is the can come dressed as fave book character that has me tapping my fingers in an anxious fashion. This of course is merely the latest in a whole series of Preschool related anxiety-tapping moments. He has attended less than ten times and already I have worried about him 'having no friends', 'playing all alone', 'wearing distinctively weird trousers' and 'Suzie ate my cheese.' This last came directly from Young Master when I asked if he enjoyed his snack box. Despite the fact that there appears to be no Suzie in his class I still feel slightly anxious because what if he's being bullied by an imaginary friend?
We all know what happens to kids that are different, I told my husband.
They grow up to be leaders and artists and imaginative thinkers, he responded.
Perhaps, I  nodded, and perhaps the other kids peck their eyes out.
Re Book Week and dressing as fave character, it seems obvious to me that firstly there is no "can" there is only "will".  Tricky must go dressed as something bookish because otherwise he will be different and, as we know, different is dangerous.
Problem is, Tricky's fave books just now are The Gruffalo (orange eyes, black tongue, poisonous wart on end of his nose), The Waterhole (various non-extinct and extinct animals), The Very Hungry Caterpillar(two choices, caterpillar or butterfly) and various Charlie and Lola adventures.

I have a scant couple of weeks to solve this and while I am confident in the papier mache sphere I do not have stitching abilities. Butterfly wings for instance are probably right out.
If worst comes to worst, I told C, I could just write Charlie on a tee-shirt and he could go as "Charlie".
C was unimpressed. "He likes Where The Wild Things Are," he said "why doesn't he go as Max? All he needs to do is wear that hoodie."
I stared at him.
"Max wears a full body suit with hood and ears", I said. "We don't have anything that looks even vaguely like that."
"Yes we do", C insisted. "It's grey and sleeveless. There's a picture of a bear on the front."
"And...that looks nothing like Max in Where The Wild Things Are."
"He could have gone really wild," C insisted, "and cut off his sleeves."
I gave him the patented Mother Knows Best frown. "And screenprinted a design on the front?"
C turned back to his computer, slightly offended. "Well," he said, "that's who I always think of when he wears that shirt."
Father proving himself no help at all, I am left pondering butterfly wings and Charlie tee-shirts. Oh and poisonous warts. I'm pretty sure I could papier mache one of those up, no trouble.
Posted by OvaGirl at 3:07 PM 4 comments:

An Australian Girl In Paris

I need to write about Paris. I know that sort of comes from left field but it's always been in the back of my mind.
And I have a certain distance from it now.
I remembered this morning that I started a blog about it, years ago and it's still wheeling round the blogosphere. And sadly, I've forgotten the password so I can't change it or add to it or even delete it and start again. It's just...out there.
I need to write about Paris.
Soon.
Posted by OvaGirl at 1:32 PM 2 comments:

Tricky's third day of preschool today. C is taking him in and also doing the schoolrun with the Nephews and I've stayed behind to do exciting stuff like write and de-ant the sultanas.
I went along on the second day and basically had to be dragged away by C who is now able to ascertain when the right moment to exit has occurred. Boy, isn't that a skill and wouldn't you think after a year at daycare, I'd have acquired it too? No, because in preschools, everything is bigger and there are a billion more kids and there are so many more shiny, glittery, moving, colourful things to look at. It's distracting! And also alluring!
Me, I could have spent hours looking at the dinosaurs and the pirate ship and the plastic turtles and look there was a big couch with comfy cushions and some teeny tiny Ally McBeal toilets for everyone! Anytime! Gather round! Let's wee together! If they just put in an espresso machine I could be there all day.
Of course my biggest fear is that Tricky will be a lonely, grim faced child with no friends except for the plastic turtles and we will have ruined his life forever, because I'm neurotic like that.
Last night we put photos from his birthday party into a scrapbook and I realised he had gone quiet. It was not because he was overcome with delightful memories, nor was he stunned into silence by his mother's artful placement of pictures.
No.
He was eating the glue stick.
Ahhhh! I shrieked at him and wrenched it out of his hand. Stop that! YOU WILL NOT BE THE TYPE OF CHILD WHO EATS PASTE.
Tricky sucked on his fingers. I like it, he said thoughtfully.
At preschool, Day 2, Tricky already knew to put his bag into the locker marked with a koala and put his drinkbottle on the tray with all the other trays. His dad showed me where the fruit goes and where the lunchboxes go and where the Extra Snacks go. Tricky held my hand tightly until he saw his teacher and then he went and held hands with her. C gave me a nudge. There was a place for everything and everything has its place.
And now, for a few hours, my place wasn't with my baby boy anymore.
Posted by OvaGirl at 9:55 AM 4 comments: