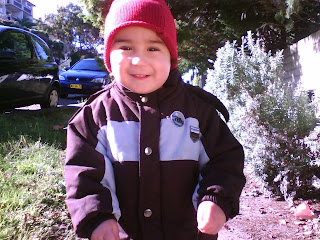 This month you decided to try putting toys into your cot.
From very early on you have been a nay sayer of the toys in bed movement. I find this hard to understand, I was a toy packer from way back and indeed have many memories of being swamped in bed by a variety of dearly loved teddies and dolls. But any attempt to pop a teddy by your pillow say, or introduce your extravagantly expensive toy monkey from Aunty AJ in New Zealand to a cot corner, would be met by fierce resistance and much shrieking, and the offending item would be quickly ejected over the side.
Sometimes this might get you started on a freakishly efficient de-clutter of your cot, and then your doona and pillow would also go over the edge..
Imagine my amusement when one morning you took every single stuffed toy out of the toy box in the bedroom and, one by one, talking to each in turn, threw them over the rails and into your cot.
Cut to later that evening when I went to bath you and discovered the plug had disappeared. And half an hour after that when I discovered the recalcitrant plug, plus three bath toys, plus a red watering can and my shower cap, all safely stowed in your cot with the rest of your toys.
It was a one off I'm glad to say. Toys (and bath accoutrements) have since been rebanned from your cot. 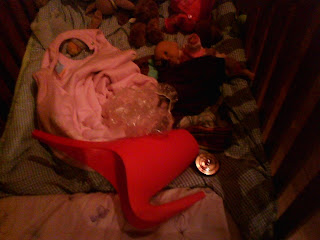 Like mushrooms, new words and phrases are appearing where new words and phrases have never been before. Or maybe they were always there and we just weren't listening.
So for instance, a couple of weeks back when we were in Newcastle you suddenly started saying “What’s this one?” while pointing at the mystery item.

It’s not just words, it’s songs. R tells me that when you lie in your little cot for a nap at daycare you spend at least the first half hour singing to yourself and “making up new songs”.

Making them up?
Possibly, or possibly R does not have the finally attuned ear of your father and I.

Your father and I knitted our brows and made little mmphing noises as we tried to work out what you were saying.
“What is bowl a bowl a bowl?” I asked. “And why a pennia peeesss?”

“Bowl a bowl a bowl a bowl!” you shouted gleefully from the back.
“He does love balls, maybe he’s saying ball a ball a ball” I suggested.
"Pennia peeesss!” you trilled. It was all sounding way too genital for me and I was ready to suggest a rousing chorus of Old McDonald Had A Farm when your genius father put it all together and mumbled: “….bowl a bowl a bowl a pennia peeeesss…”
Suddenly, the pennia dropped.

“It's Roll or bowl a ball, a penny a pitch!” we gasped. To test our theory we both sang loudly: “I’ve got a lovely bunch of coconuts!”

To which you immediately gave the traditional reply: “ava a bana.” 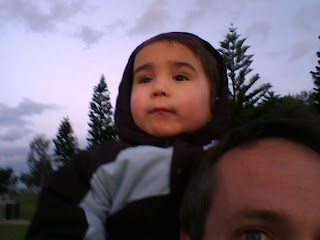 But this isn’t, say, a Wiggles song, or a traditional nursery rhyme, or even a made up Mummy song, it’s a funny old song from Grumpy Grandad’s era which we have sung in the car maybe twice since you were born. It makes me shudder to think of all the other stuff you may have absorbed, not nearly so quaint nor as tuneful, and will no doubt come oozing out this week when we have taken you to Perth to visit your other grandparents Papa and Gramma. 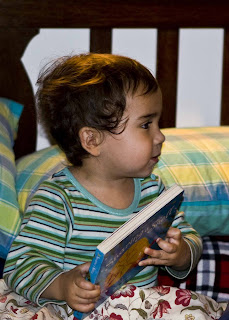 This month you have told me many things: that Charlie has a little sister Lola, that your friend T can be a bit rough, that B at childcare did a poo in his pants, and that Poppy drives a red car. You stroke Daddy’s chin and say loudly that Daddy has a beard and then you stroke my chin and I hurriedly rush for the tweezers. You ask me to walk with you and to blow your nose and to jump on the trampoline and to give you another biscuit. Sometimes you say please and thankyou. You said happy birthday to me this month and hip hooray. 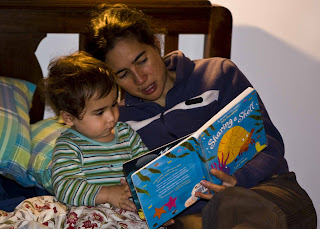 I love you so much, my little boy. Your bright eyes and your naughty face and your soft curls. You are nearly two years old and so much has changed in such a short amount of time.

Except time isn't that short, is it? Time twists and stretches, splinters and compresses.
When we have story time just before bed, it could be three books, or two and a song. And always a cuddle. And when you weren't here we had all the time in the world.

And we're often tired, or stressed with work, or pressed for deadlines.

But truly, this time, with you, has been the very best.

Your very own
OvaGirl
xxxxx
Posted by OvaGirl at 8:38 PM

Little sponges aren't they? J and I have FOUL mouths. I won't be at all surprised if Zoey's first word is Fuck (but that'll be her dad's fault).

As ever OG, a wonderful tribute to him, and his current state of affairs, a real snapshot of how things are. I love the singing in the car, and I can't believe how well he is talking, gosh he is saying a lot.

I hope that the visit goes well, and that he doesn't come out with too many things that make you cringe!

I love your stories of love to Tricky. All the memories you now won't forget. Here is a beautiful child who will always know he is loved. There's a twinkle in his eye, right?
I hope your visit goes well.

I am addicted to your letters to Tricky. Translating toddler talk is something else. Mae has been saying "Hoppyshoe" at various intervals for a while now, and it wasn't until tonight when we saw a picture of a birthday cake in her book that I realized she is trying to say "happy birthday to you."

So Hoppyshoe, OG. I'm right behind you.

I think it would be good to put all the letters to Tricky in a book!
He is a much loved little cherub!
A little magpie too by the sound of it. Hope his cot is not littered with any other no no items!

I'm finding that translating toddler speak is actually getting harder as time goes by, not easier. When it was just one word at a time it was pretty easy to figure out, now that it's sentences I find it much more difficult. I laughed and laughed at pennia peeeeeeesss! And I think it's great that he filled in the next line when you finally got it.

There is an award for you to pick up over at my place!