Death To The Earworm 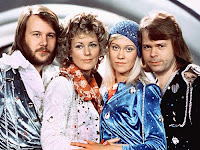 The Nephews have been singing a song this past month.

I have no idea what it’s about, it is a song in another language, something possibly Scandinavian, but it sounds like it has something to do with Picasso and fetta cheese and it’s annoying as all get out.

They love this song and after watching all the one billionty multiple versions of it on YouTube they sing it around the house and in the car on the way to school ad ear-bleeding-spontaneously-from-brain-nauseum.

(At this point I could link to this song or perhaps even plop it right here in the middle of my post but frankly I don't want to add to the power, so you just have to imagine the ghastliness, or, if you know it, you'll have started humming it already. Oops.)

The other day, despite all my best efforts with Old McDonald Had A Farm, Naughty Nephew the 3rd started singing what I call the Hellish Scandinavian EarWorm Song in the car on the way to school.

In vain did we beg him to stop.
In vain did I try to sing that Abba classic: Nina Pretty Ballerina back at him, hoping the euroclash of Scandinavian pop would cancel each other out.

Finally, I lied to him.
Do you know, I said, what you’re actually singing?
NN3 stopped a minute to consider… hello hello? he suggested.

Yes, hello hello, I said, yes. But the next bit goes like this:

And because the tune had been seared into my brain I actually appeared to make the words scan.

NN3 looked at me, slightly horrified. He loves icecream. I ruthlessly pressed on with the second verse:

I hate chocolate. Yes I do.
I hate it. I hate it.
Please will you never give me chocolate again.
Or icecream.
Ergh!
I hate them. I hate them.

I stopped. Do you want to hear the verse about sausages?

He shook his head. What’s that one about the ballerina?

HELLISH SCANDINAVIAN EARWORM SONG HAS NEVER BEEN HEARD SINCE.

*post updated: until last night. WHEN THEIR MOTHER STARTED SINGING IT.
Posted by OvaGirl at 4:57 PM

pretzel salad is whipped cream on top of red jello on top of a sweet cream cheese on top of pretzels.

I hate ear worms. Thank you so much for not linking it.

I love how you handle the NNs.

I am amazed by your lyrical talents.

Now I am going to waste hours at work trying to find this damn song!

I haven't heard the song, but it doesn't sound like I am missing much there, and I am very impressed with your tactics to get rid of it! I can't imagine what horror your face must have had on it when the NN's mother started singing it!!

Well done! I'd have never have thought of something so clever!

excellent parenting/grown up strategies. And i hope everyone will remember, when the ice cream van comes round, that little song they blast out of the speakers, it means 'we have run out of ice cream, so don't bother coming'.

Hmmm I do feel a bit bad about lying to my youngest nephew. Studies now show that children learn to lie from adults and so I guess that was a bit of the old Home Education happening right there...(little nod to grit)

Spanglish...that pretzel salad sounds appalling. Does it taste any good?

The whole post cracked me up. Especially the last line. Did you tell your sister what it means? ;-)