Bird lovers have The Field Guide to the Birds Of Australia (Pizzey & Knight 1997), algae and scum enthusiasts have The Observer’s Book Of Pond Life (Clegg 1956) and small folk whose faces light up when they catch even a distant glimpse of our four legged friends have Hairy Maclary from Donaldson’s Dairy (Dodd 1983). 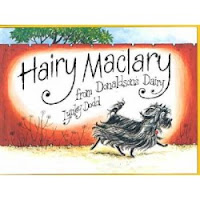 Tricky loves dogs. All dogs, all shapes, all varieties. He loves them deeply, from afar mostly, calling out “da!” and smiling delightedly at their hilarious doggy antics.
Because I want to be an integral part of all the things he finds delightful and also because I want to impress upon him that I am Very Clever Mumma, I scour the landscape for dogs that he, being so short, may have missed and then I point them out along with a short informative description:

This works reasonably well when the dog in question is actually a dalmation, or (in the case of “Look! It’s Schnitzel von Krumm with his very low tum!”) a dash.. datch... sausage dog.

However, often these dogs are unfamiliar to me. This is because they are of a breed not covered by L. Dodd in her excellent series, or worse still, a mixture of several, and then Very Clever Mumma comes a cropper by insisting that a passing large dog is “very much like” Hercules Morse (as big as a horse) or that a glimpse of something fluffy on legs must be Muffin McLay (like a bundle of hay) or similar, and anything not large, not fluffy and vaguely streamlined can only be Bitzer Maloney(all skinny and bony)

This last caused some consternation when we were at the markets recently and the owners overheard our dog-spotting. The dog in question was actually quite healthy looking and not skinny and bony at all, but certainly it was…you know…slim.

I could have gone the other way and called it Hercules Morse because it was also a larger breed but the “big as a horse” bit could have suggested that we saw the dog as hugely fat, obese even, and the owners as uncaring, brutish, junk food scoffing troglydytes who wouldn’t know the first thing about proper care for their poor, canine, Elvis-heading-for-a-heart-attack beast.

Of course they knew nothing of Ms Dodd’s magnus opus (even though it should be mandatory reading for all dog owners) but luckily I didn’t want to buy their pickles anyway, and, as I consoled Tricky, there were plenty more Bitzers, Bottomleys, Hercules and Schnitzels out in the world.
Or similar.
Posted by OvaGirl at 11:49 AM

not naming names...but it sounds like someone needs to pick up where Ms Dodd left off!

Been meaning to find time to add a comment to the 'IVF stress' post but, alas, have barely time to update my own blog, let alone dig out, dust off and re-examine the stresses of infertility. However I will try - I promise.

Oh, and it's an Alpha Romeo. An. Alpha. Romeo. In fact it's an Alpha Romeo GT sporty go faster type model. Which is probably not very exciting for anyone who really knows cars but is great fun for someone used to plodding around in an MPV and it certainly beats the hell out of the Vauxhall Astra I had last time. Actually I don't really care about cars much - but, then again, it IS an Alpha...

What a charming little book. I love the cover. Being dog minded I will certainly invest in that bit of literature for my little monkey.

Maybe the Screaming Tomato can leave a vegemite fingerprint on the inside sleeve too?