Tricky is a water baby, born in July, Cancer, like the motherperson, much to her concern. (Oh dear, that means two over sensitive, moody as all get out, easily enraged, fiercely loyal, grudge bearing, easily spooked, crab people in the family. )
Thank God that C the fatherperson is a jolly Sag. 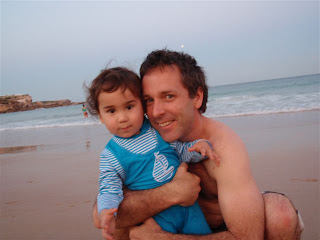 Tricky has not yet learned to fear water but that may come. His mother has nearly drowned twice thank you very much, Penang and Phuket, and every year when she joins her extended family at the beach be it Fremantle or Bronte, Newcastle or Byron Bay, she stays just that bit closer to the shore.
The water laps pleasantly at her knees and the fatherperson tries to entice her further in and when enticing doesn’t work, attempts violent abduction, but she is very good at the stern voice and the prune mouth and so he laughs and lets her go and stands on his head and waves his feet at her.
And now the fatherperson has a smiling toddler to ferry through the waves and carry on his back. 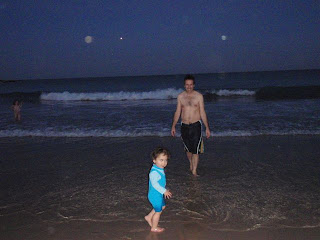 It is not quite swimming time here, the water is icy but already there has been fish and chips on the beach with the Naughty Nephews and sandcastle making at the beach and digging of personal puddles with new plastic spade and fork. 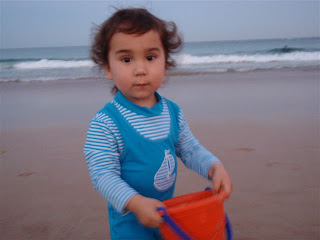 On the weekend there was a trip to Newcastle and that led to an excursion to the wetlands which was almost educational and may well have been if Tricky could read, say, or pronounce ‘catchment area’ or ‘biodiversity’. But instead it was all about walking with Aphwa and Poppy, the east coast grandparents, (as opposed to Gramma and Papa on the west) and a certain amount of dip netting aka “bishing”. 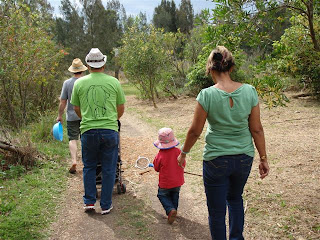 Despite many an effort with the dip net, the bishing was unsuccessful, in that no bish was actually caught although shoals of the things could be spotted weaving and darting through the swampy waters. 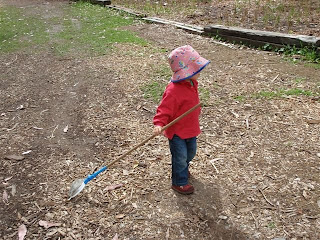 I didn’t bother taking pictures of the menfolk and their earnest, bloody-minded attempts to catch a fish for Tricky, I simply laughed. 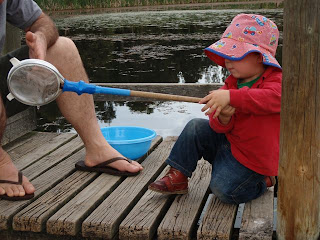 The point with the dip net was really just to dip and empty into a basin to see if there was anything in the net such as weed, water beetles, leeches or damselfly nymphs. 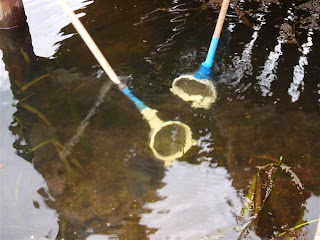 The basin started embarrassingly with a bit of bark but as the day wore on a succession of sucking, wriggling, biting insect larvae were caught, examined, prodded and returned. 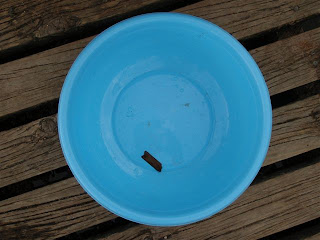 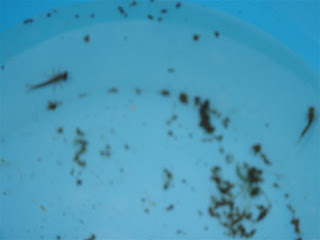 Back at Poppy and Aphwa’s house, the swimming pool (fenced yes, poster demonstrating CPR, yes) is also a great attraction, what with Poppy’s regular skimming (which is really just an oversized dipnet) and Jimmy the dog leaping in and dogpaddling from side to side.
And Tricky found a small broom and did some serious dipping and skimming with that. And it was good. Which is why, early on the morning before we left, with the fatherperson half asleep, and an extremely alert and cheerful toddler quite determined to dip the other side of the pool, there was a sudden splash and a roar and a very very loud and long cry for Mummy.
I did not see him fall and for that I’m quite grateful but I held his frightened trembling body and kissed his salty wet face and also the pale cold face of his father.
And that night, snuggled up together, C woke suddenly with a start and a gasp and the image seared into his head of his baby blithely stepping over the edge and sinking and rising to the surface and starting to sink again as C reached him and pulled him out. 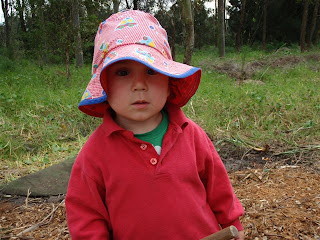 How scary. I'm so glad C was right there and your little boy is okay.

Oh my g-d, I'd have nightmares too. My heart stopped just reading about it.

Awful, Tricky probably wont remember it for very long, but as an adult it is one of those things that is very hard to put out of your mind, not surprised that C had a nightmare about it.

Very glad to hear that everyone enjoyed the bishing though!!

So glad Tricky is ok. Those are scary moments and awful dreams. I've had a few that keep me awake and alert way too late. Our pool is shallow and Sabby reaches now. Our three year old grand daughter is my fear these days.. she has NO FEAR.
Looks like you all had a wonderful time fishing or bishing.

holy snapping arseholes OG... this post scared the shite out of me, I can only assume how horrific it was for you & C.

I don't remember being scared when I watched both my brothers almost drown during two different times in our lives -- one in the ice-covered lake and the other in the ocean. I must've been traumatized because I remember both events with mild hallucinatory details.

I can't imagine how horrifying it would be to see it almost happen to one's own.

We are back in Newcastle on Saturday, I will be interested to see how he responds to the pool.

Also there will be hawk-like watching...

how terrifying. glad all is well (except for nightmares to come)

It looks and sounds like an absolutely lovely weekend - aside from the unplanned dip. SO glad that Tricky is okay!!!!!

Both mine have had a slightly scary water experience, both fortunately with me close by so they were very short-lived. Neither was in any way traumatised, but the same cannot be said of me... He may be a little young for swimming lessons but you could establish an obligatory wearing of armbands by the pool rule. Otherwise, the trip sounds great; nothing like a bit of bishing. BTW nice to see C at last!

That happened when my brother was about Tricky's age. There was panic and adults jumping in pools fully clothed. He is so adorable.

And fortunately, being a waterbaby and all like his Ma, he will (eventually...because after all he is a sensitive, moody, easily enraged, loyal, grudge bearing, easily spooked crab baby)) love his swimming lessons and most likely learn very quickly.

So...Lin here. That granny comment above is mine. GrannyP was just here for a few days and I guess her google account is still ghosting on my machine...or something. I just turned it off, on and signed in with mine. Let's see if this works.

Heart-stopping stuff. One minute the world is spinning rosily as normal; the next, you're
suddenly chewing on your own stomach, because it's In Your Mouth...

I'm not a water-baby at all, and Harry must sense it. I now get Hubby to take Harry to his swimming lessons, as he responds so very much better to him than to me. Harry won't even lie down in the bath for me, whilst with Hubby he kicks up a watery storm. Strange.

Can I just say, that Tricky is, without doubt, the cutest toddler I have ever laid eyes on. I can't see a photo of him without wanting to nom nom munchy nom!

My heart was in my mouth when I realised where this post was going.So glad all ended well.

I am a water baby (an Aries though - go figure) and my two have inherited the love of water. I still have advanced paranoia as they can't yet swim sufficiently well despite lessons since month 6 and I have had to do the fully clothed into a pool jump myself. I would go for the float swimvest thinggies rather than the armbands though.

Lovely pictures and what a gorgeous little chap!
I wish I could swim! I steer well away from water unless I am sitting near to a life boat or something!