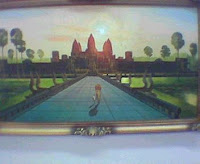 A few years back I went on a silent retreat at a Buddhist Wat with my friend Annie.

It was my first time at such a place but Annie had done it at least once and her familiarity with the silences, the cold morning walks along moonlit bush paths, and the two story drop toilets, was a comforting presence.

It wasn’t entirely silent of course, Annie had arranged for me to share a cabin with her - usually one would be placed with strangers or in a separate cabin or caravan to ensure non-engagement. As it was, a stray fart or burp or snore led to a stream of giggles hastily muffled lest any nearby meditating monk should be disturbed.

Early each morning, and it seemed very early indeed but was probably around the same time I get up now, we gathered in the wat.

Here, on the stone floor, we folded our legs beneath us and began to focus on our breathing, in an effort to still the mind and eventually attain enlightenment or a bladder of iron whichever came first.

It was here that the first awkward attempts at what would become the infamous OvaGirl Breathing Technique (as used in HSGs, blood tests, horribly painful egg retrievals and um…childbirth) appeared. Breathing through my nose and out my mouth, half asleep, concentrating, drifting away, coming to with a jolt only to discover a thin line of drool hanging from my chin - I think it was the glamour that initially attracted me to the retreat.

I never went back to the wat in the mountains but I did learn some things that have stayed with me.

I also learned about loving kindness and the necessity of spraying this towards others as well as towards oneself. Much like some projectile vomiting demon child.

And finally I learned about mindfulness; that we need to be mindful in all our tasks and to be present and in the moment, so that, for instance, when one is eating, one must be present in the moment of eating, and aware of the taste of food and the slopping onto the white shirt etcetera…

And all these are good lessons, but frankly, just at this stage of my life, unattainable.

The joy of sweeping for instance has been replaced by the joy of sponging a full sippy cup of milk out of my mattress and quilt, where it has been spilt, nay flung, by a screaming tomato at 6.39 in the morning. Being a deliberate act, this immediately plays havoc with my loving kindness and instead inspires my frothing rage which must of course be suppressed and instead can be directed at my husband three hours later when he forgets to take the pooey nappies downstairs and throw them in the bin.

And the mindfulness.
Please. I seem to have entered the world of the Eternal Multi-tasker.
I cannot remember the last time I did one action in isolation.
If I am eating, I must also be reading my emails.
If I am talking on the phone during a meeting with several other writers in our guild about various state issues, I must also be picking up toys. At the same time I will be hiding to avoid my toddler, who is being minded by his aunty downstairs, actually realizing I am still in the same house.
If I am doing the washing, I am also attempting some lame-arse exercises for my sagging butt.

And I’m not even going to bother telling you what I was doing when I started composing this email. Because it’s probably where you do yours.

I think back to that weekend where all I had to do was rake and sweep and meditate and be in the moment. It was freezing cold and I was scared of snakes and the toilets didn’t flush. There was no coffee and I missed C.

But sometimes I dream about the silence.
Posted by OvaGirl at 1:38 PM

My child must never see that...

I still try and do sweeping/raking/weeding and usually dangerous small people can be handed their own broom/trowel and be left trying to find their own inner calm. Doesn't ever last long though.