The Heaving Underbelly of the Perpetually Sleep Deprived.

So the other day I was meeting another writer for a coffee in an area recently made even more famous by the Convincingly Fake Chk Chk Boom Girl.
It's an area that's been in my mind a bit of late because it also features in a lot of the research I'm doing with playwrights gang 7-ON on Sydney crime in the early 20th century. Kings Cross does celebrity crim very well, there's lots of seedy corners and shabby chic buildings and various spots of interest where you can almost see thirties Bordello Queen, Tilly Devine striding up to the corner shop to get her milk.
In short, it's a little distracting, all that crime history and myth and colourful racing identity stuff and one can, if one is a bit unsure of where one is going, end up...say...the wrong way up a one way street.
I'm not the best driver in the world, I think I may have mentioned before that reverse parks do not feature highly on my list of sensible grownup skills for instance. When I am trying to do a 180 degree turn in a small laneway squeezed between a refuge for the homeless and a delivery van for one of the million or so coffee shops nearby (none of which is the one I am trying to find) and I am being hassled by a feisty baglady, I do what Tilly wouldn't do, which is, I have a panic attack.
The previous weekend C and I had spent in The Rocks which is another area soaked in history, myth and colourful racing identity stuff. In this case The Rocks, being older had the first colourful racing identities, even though of course when the First Fleet sailed in there were no racecourses as such and it's debatable who those first criminals really were; the convicts or the military who sailed alongside them.
This was not a fact finding mission, this was A Break From The Screaming Tomato. Aunty N very generously offered to look after Tricky for the weekend and after some humming and ha-ing (about three seconds worth) we went. Initial pfaffing over where should we go, mountains? central coast? south coast? led to...let's just stay in posh hotel in city (wotif.com you rock) and sleep.
But C and I have both been reading John Birmingham's excellent Leviathan and so it was just a bit of gravy to dress in our posh clothes and head up to our posh restaurant and say...ooh look, that's where the previously pure and uncorrupted Tank Stream ended up a filthy cesshole of turd soup and dead goats, and hmmm I think these may be the houses that kept filling up with raw sewerage and...around here would be where those larrikin push gangs attacked innocent bystanders and hit them with socks stuffed with sand... and ook look what Brian Eno's done to the Opera House, talk about colourful racing identity... 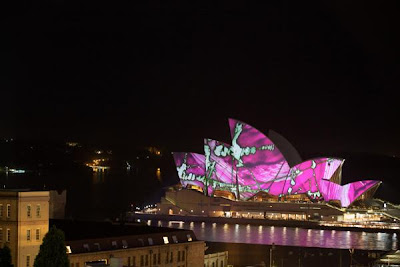 The break was fantastic, of course, for all the reasons you may suspect, but equally good was being able to buy half price shoes in a shop you couldn't swing a toddler in and then going 'fuck it I'm going to buy two pairs'. Because, when was I going to get the time to shoe shop again before he starts school? The last time I bought a pair he was about five minutes old and strapped into a pram. Also asleep.
It was very nice to actually have time to talk to each other and to look at each other while we're talking, instead of shouting over one shoulder whilst buckling tiny shoes or changing tiny underpants or combing out tiny nits. It was nice to be reminded that, oh yes, it's you, my best friend, my biggest fan, my partner in crime. I remember you. I love you.
Returning to the real world we have taken on some of the Aunty N/Uncle K modifications in place and they seem to be working well. Star charts to reward Sitting In High Chair and Eating Food are going great guns but I fear the Speaking Quietly and Politely may need a little heavier artillery. The biggest change is to bath Tricky before his supper, not after as we used to do. It makes the transition to bedtime so much quicker and I think the 7.30 bedtime is doing a lot to head off some of Darth Toddler's more criminal behaviour.
Back in Kings Cross, stuck between a van and a hard place, I was attempting yet another billion point turn. The baglady was now informing me that my licence had come from a soap box (cornflakes box! I wanted to tell her, it was a fucking cornflakes box! but at that point I was beyond speech. I didn't dare look over at the wayside chapel residents gathered in the yard, I felt I was doing my bit providing the morning's street theatre.
At that point, a figure stepped out on the road, a little shabby, a little shady, brandishing a large broom. It was a guy who had been sweeping unmentionables from the road.
Thissa way! he beckoned me towards him and then reverse thatta way! And he pointed his broom in the right direction. It was as if pure beams of light were shining from the handle piercing the darkness of ohfuckfuckhowdoigetoutofhere. I turned the wheel and moved thissa way.
A car started driving up the lane towards me, the right way.
Oh dear, I said.
Don't worry! He can wait!
And up went the broom in the international signal for Stop And Wait For The Idiot Woman Who has Other Skills To Make Up For Crap Reversing.
Thank you, I said, and it was sincere and heartfelt and just a tad wobbly. Thank you for being so kind.
He waved.
And with a final swing I was out, past the van, past the appreciative Chapel chaps, past the baglady with the impeccable driving record and past the guy with the broom, the angel in the fluoro vest, who swept me and my unmentionable driving skills clean from the streets of King Cross.
lovely opera house pic from here smh.com.au
Posted by OvaGirl at 10:01 AM 5 comments:

A galaxy far far away from Darth Toddler

C and I have just returned from a weekend away.
It involved lots of sleeping, shoe shopping, spontaneous swimming in hotel pool and ducking into miniscule decidedly child unfriendly cafes for quick coffees. It also involved posh dinner eating, walking for miles about the city and harbour and champagne at 4pm.
It did not involve pushing strollers, changing mumpies, sitting on tiny stool and encouraging eating of porridge, marathon teeth brushing sessions or tantrums.
Friday was the first night I have ever had without Tricky sleeping more than one room away. I wish I could say on Saturday I slept in till ten but sadly, both mornings, I was awake by seven.
It was the first time ever I had gone out for coffee without a matchbox car in my handbag.
It was fantastic, once the bottom lip stopped wobbling. His and ours.
But I believe it was wobbling far longer on our side of the galaxy.
Posted by OvaGirl at 11:54 AM 8 comments: 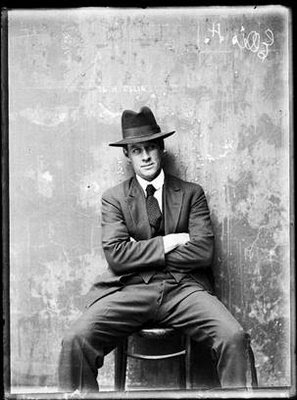 Ack it's true there has been a significant amount of slackness in the House of Ova (sudden image, eek sorry) but that's because there has been a significant amount of tension.
I remember in the eighties, early eighties, when people used to talk about 'biorhythms' and there were three lines representing your health, your...god I don't know, two other Important Things, but these three lines went up and down like waves and it was something about when the three lines met then kachow!
Either that or I'm thinking of Ghostbusters and how you DON'T CROSS THE STREAMS!
Deadlines large and small to be met (or not), Stuff to be researched and written, conversations to be had, toddlers to be bathed. This last should have its own post except it's part of the Hellacious Triumvirate of dinner, bath and bed. I whined about just this to Screenwriting Mummy about this the other day and she said...yes I remember that phase, it goes for quite a while.
Cruel words but then her own toddler boy, previously an utter angel, is entering the shout and hurl phase himself. Great screaming tantrum in the bath can only be a few short weeks away. Surely. At least it's stopped me drinking wine at dinner. There is nothing more horrendous then winding down with a nice glass of crisp white to be almost immediately wound up again by a Screaming Tomato.
It has been a strangely disturbing time these past couple of weeks and I include swine flu and the horrific disappearance of that Air France plane. Maybe strangely disturbing things happen all the time, of course they do, I know they do, but for some reason my wobbly consciousness is stringing them all together.
So friends and loved ones have dropped their bundle or been under attack at work or had cancer scares and tasks seem difficult and stodgy and I feel fat and unhealthy.
And some of the writing and research I'm doing, murder scenes and mug shots from Sydney's inglorious past. Baddies, like the guy above. And page after page of broken bodies and bloodstains. It's disturbing and unsettling and slightly haunting. The playwrights' group I'm in (7-ON) is doing a 2 week workshop with the Sydney Theatre Company in a couple of weeks time and the photographs are prompting the writing which will in turn become a show.
And that's great, that's tops, but the other thing that's happened is that I've won a playwright's prize which will see me doing a two week workshop with Edward Albee here in Sydney and also at some point jetting (!) off to Los Angeles. (!!)
And that's great, that's tops but the two week STC workshop and the two week Edward Albee workshop are THE SAME TWO FUCKING WEEKS.
And that's a little, you know. Poor.
Anyway, that's how I've felt a bit this past couple of weeks. Ultimately I'm good, I'm happy. I'm lucky. But it's just all this Stuff swirling around that I'm noticing and collating and examining and feeling affected by. Which is not the same as feeling infected.
More like, someone, somewhere, crossed the streams.
Posted by OvaGirl at 9:59 AM 9 comments: