And then he was two 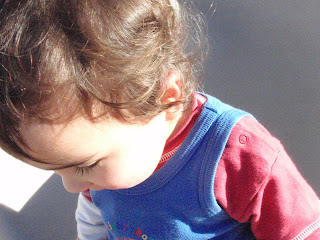 And it was glorious.

What do you think of, I said to his father, the fact that he's turning two, what does that make you think of?

I think...that time goes so fast, he said, that I can't believe it's two years already.

I think that, I said, But also I think of this day, and the days that led up to it, giving birth to him and what a strange and extraordinary time that was.

And then I think of the years that led up to that day.

and then he came.

And even now, two years later, sometimes I can't quite believe it.
Posted by OvaGirl at 9:44 PM

What a wonderful post! I read through your link, of Tricky's birth. Amazing story. Congratulations mom.

Happy Birthday, darling and handsome Tricky who I hope continues to grow in that weedy way that little boys do, but I also will miss the baby pictures.

Happy Birthday to Tricky and his mom and dad.

I can't believe how fast the time has gone.

It seems impossible that he is two...that this journey of yours has been so truly scenic and wonderous!

And I can't believe it either.

Two already? It simply can't be.

Me and Frangelita whooped with joy and alarmed all our menfolk when he was born :)

Happy birthday all of you :)

Oh a massive Happy Birthday to Tricky, what a magical day, and I can understand how much it must feel like this time has passed quicker. It is because you have enjoyed and cherished every day that you have had together, and that is absolutely how it should be. Lots of love to all of you on such a special day.

I'm so annoyed with blooger (that was a typo, but somehow appropriate), I don't seem to be able to post comments at work any more! So I'll try and reprise what I had attempted to say yesterday on Tricky's actual bday...

I can't believe it's been two years either! And also, how very very lucky we are to have these little guys in our lives. Incredible, really.

Happy birthday Tricky. And happy day to you too, OG!

I still am amazed every time I look at my two. I said to my husband the other day when they were playing together in the garden - they have only just started to do that (the nearly 5 yr old fnally finding teh nearly 2 year old interesting) - can you believe that you me and a petri dish or two did that. In a way whilst I wish it hadn't had to be that way it is kind of cool.