Letter to a 30 Month Old Yes You Can Man 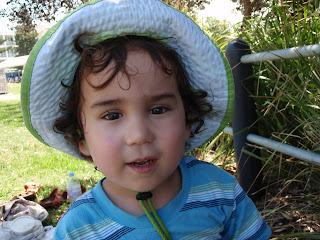 I don’t pink so…instead of: No.

Let’s see how we go…instead of: Not Now

Mine don’t need it…instead of: actually I don’t want to do it at all, not one bit.

Yes, for the record, toilet training has properly begun, with lots of urgent calls of  Mumma Wee Wee! interrupting  a game of trains or cars and ending, mostly, quite happily. The potty has been reinstated as an alternative to the toilet, the garden and the shower (when in tearing hurry). You are the king of Number Ones but so far Number Twos have whipped your butt so to speak, hence your polite refusals to perform on the toilet I can’t, no, no pank you, mine don’t need to do poos…

How it makes me chuckle to think back to a conversation I had last year with another mother of a toddler, where I told her I thought we would “get the toilet training done in the week before Christmas.” Haw Haw. Your mother is a prat.

This morning you started daycare again after several weeks of being with either Mummy or Daddy or some other close family member like Aphwa or Aunty N. And so perhaps it should not have come as such a surprise when, after dawdling over your Weet-bix, you said rather nonchalantly: Mine don’t need to go to daycare today.

Yes, we said, smiling at each other, but we need you to go.

Mine don’t need to go to daycare, you said again, a little louder this time in case we’d failed to understand and then in a cheerful tone: where we go today Mumma? Mooseum?

We go to daycare today, I told you but there were no mor

e smiles. We buckled on your new sandals, we packed a spare pair of big boy undies and we bundled you and the two youngest Naughty Nephews into the car.

Off we go, we chirped in that maddening We Grown Ups Always Know Best tone as you frowned and tugged at your hair and refused to sing the National Anthem with me. (Have discovered it to be excellent lullaby and quite successful in sending you off to sleepy bobos.) And then, once at daycare, the waterworks began in earnest, the pouting lips and the angry screwed up eyes and buckets of tears cascading down from your cheeks and onto mine.  Your carer very sensibly took you by the hand and sent us packing, although I do admit to hovering outside the gate and peering through the slats of the fence to make sure you were ok. The tears had gone before we managed to close the gate but to be fair that gate has a very fiddly latching mechanism that takes all of …oh…ten seconds to complete.

January has seen you swimming at the beach with your Dadda, often beyond the waves much to your mother’s discomfort, suspended on your Noodle (not the play dough variety.) You kickaboo your legs and do your paddle hands and push the water away and you could do that all day, so much do you love the water and your dada and the sensation of floating self propulsion. You never say I can’t in the water. Although you do protest It’s Cold at times.

We go to the supermarket and you sit in the trolley with sultana bribes and help lob potatoes and miniature tins of baked beans over your shoulder. Once, you promised you would just walk…and instead you bolted from one aisle to the next with me in hot, embarrassed pursuit. And another time, carrying you against my chest, you wrapped your arms about my neck and held your cheek to my mouth and I whispered in your ear. And no actual shopping was done that day but the kisses were nourishing.

He’s still a baby, one of my friends gently noted the other day and I opened my mouth to protest, oh no he’s a big boy , to say how much you’ve grown and changed over the past months, but instead, seeing at your soft round cheeks and your wispy curling hair, I just nodded and smiled.

This afternoon, after daycare, all smiles again, we went to the beach and I looked with a sort of wonder at your footprints in the sand as you shrieked and ran to and fro from the waves. 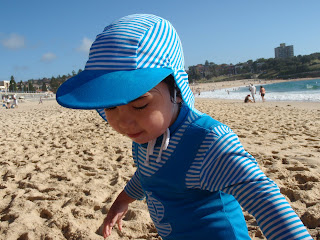 Mine can run Mummy, round and round, mine can run!

And I thought yes you can, my big boy baby, running round and round, yes you can.

My husband gives me bizarre looks when I let that one slip out.

Nice letter. I always enjoy how you tie up your openings and endings so neatly and with such loving, gentle humour. People whose mothers have no literary flair have to read old journal entries that go like this:

"I went to the shops to buy some milk. Bertha has a new hat. Roger Federer lost the tennis and it was sad, but the other one has a cute bum."

So, Tricky is very lucky.

Yes, Tricky is a lucky big boy baby but I know that you are well aware that you are, too.

He remains, with those puddingy cheeks and liquid brown eyes, edible.

but Thoraiya i laughed very loudly at: bertha has a new hat. Love the pudding cheeks Lin, will pinch one for you when i pick him up from Day 2 of daycare '09. Still insisting this morning as I took him out of the car...but mine don't need to go to daycare, mine don't need to.
Finally I said: darling, what you mean is; I don't want to go to daycare, not I don't need to.
Pause as he digested this. Then, as we entered the gate he shouted I DON'T WANT TO GO TO DAYCARE.
Despite this, less tears today and expect less again tomorrow.

Smart boy what with the quick grasp on the grammar lesson... I wish my teenager students could learn that easily.

I so miss the beach. And the pool. And the sun.

I think I will be a bit glum when the "my going my swimming" stops in favour of "I'm going swimming".
He remains very adorable at 30 months.

Since Will is only a few weeks younger than Tricky, I know exactly what you're going through. They're growing up and I DON'T like it!

Ah yes. I am frequently met with, "No Mum, I caaaaaan't." It's not like I'm asking her to scale a skyscraper with suction cups glued to her hands - just simple things like drinking all of her milk or walking across the room to pick up a toy. I CAAAAAAN'T.

Way before I got pregnant, I passed a little girl and her Mum when I was walking to work. As I went by, I heard the mother say, "No, you are NOT too small to walk!" Oh, how karma has bitten me in the ass for laughing, as I have a child with similar chutzpah and abstract thought. Lucky old me.