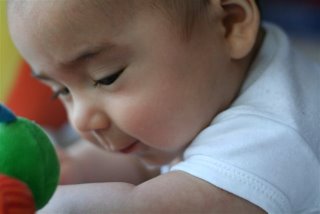 You are five months now which seems insane, because if anyone had asked me if I could survive five months of broken sleep; broken like a broken thing into itty bitty shards and then scattered over a bare wooden floor to be trodden on by soft, unprotected feet, I would have said no way and that sleep deprivation is a cruel and inhumane torture that turns otherwise sane people into the Living Dead. I had heard the horror stories from other new mothers, the tales of screaming and wailing – and that was the neighbours as they bashed on the walls in protest - and indeed the memory of those nights when you wanted to be fed hourly is still pressed firmly into the playdough of my mind. But things have got better, there is light at the end of the tunnel where the Zombie Mother lives, and the last two nights you have actually slept all the way through. I don’t know if it’s because I’m trying to feed you in a more regulated way or because I decided to swaddle you again, but whatever, it worked for two nights and if I have to swaddle you until you’re eighteen I’m prepared to do that if it means we all get some sleep.

Because there’s work to be done! Yes, even though Christmas is bearing down on us like a demented steamtrain with all the festive fun that entails, even though I’m looking forward to our first ever Christmas together, still the deadlines niggle and whirr and click, for both your father (who even as I speak is muttering like a crazy man at his computer screen) and I. So there’s not quite as much festive fun yet, although I know it’s coming because there are not one but two Christmas trees up in the Big House which your cousin O, the youngest of the Naughty Nephews has helped to decorate.

Just by the by, Cousin O is your new best friend now. Almost everyday he appears suddenly by your playmat. He smiles at you and you smile at him and it’s a complete love-in smileathon and then he lies down next to you and allows you to grip his hair and says gently “Please let go…”

Now and then he will dance and sing to you and that’s a treat for everyone, because his version of Rockin’ Robin is so damn cute. C and I pretend to be solemnly clacking away at our keyboards but everynow and then we catch each other’s eye and silently snort into our screens. On very very special days, Cousin O will do one of his world famous puppet shows with all your finger puppets. These are, inevitably, musicals, and I think we can say that Cousin O has a bright future on the stage awaiting him and his twinkle toes.

But perhaps you too will be struck hard with the showtunes stick because of late we have been utilizing Cousin O’s ‘Honeybear’ to help you with your daytime naps.

Honeybear is one of those musical thingys with a string you pull to make him pop up and down as ‘Teddybear’s Picnic’ hypnotically tinkles away. Honeybear is both wonderful and sinister. His soothing sounds put you to sleep but I worry that you will become addicted and that he will become crucial to your Nap Routine. Worse is when you are almost but not quite asleep and the damn string runs out. Someone then has to sneak into your room and pull the string which makes a nasty clack clack noise and often abruptly wakes you leading to accusing stares and Screaming Tomato.

You are fascinated by balls and baubles and your father shaving in the morning. You have started to enjoy your bath which is a relief because your father was determined to make you love the water. In actual fact you seemed to hate it so much we eventually stopped bothering to bath you altogether. But this month, you like the water and you love to kick the shit out of your new bath toys.

You gave up the dummy a few weeks back, not through strict weaning on our part but through general slackness and forgetting to sterilize the damn things or carry them in the change bag. Now you suck thoughtfully on your index finger and I smile at your fetching cuteness and sometimes you suck on two fingers and your thumb at the same time and make yourself throw up and then I frown because Mummy is weary of wiping spew off the floor. 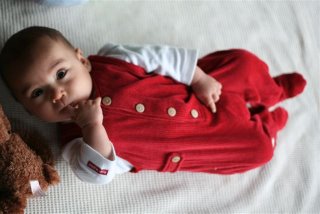 Rolling is your thing. You lie on a rug on the floor and roll this way and that reaching for your toys…a soft ball, a blue giraffe, a stripy monkey, Mr Caterpillar with whom you still enjoy a ferocious tussle and of course Cousin O’s hair. The other day I was typing away and you had gone silent beside me and I looked down at you and you were staring up at me. It gave me a shock at first, you looked like some crazy Midwich Cuckoo baby but then I decided you were looking at me with love not psychosis and that made me happy.

I think maybe this month is the month you actually saw me and knew me as your mother and loved me. There was a moment when I put you into your cradle and we locked eyes and I started to cry because I realised just how much I completely and utterly love you and I knew that you loved me too.

Just in case you think I am being hopelessly mushy here, I'll just add quickly that your father and I have decided to break that habit we have of chewing on your ears. It's done with love and also because your ears are so soft and cute but we appreciate that all that chewing may not retain the softness and cuteness.

So even though they're doubly delicious because of those regular baths you're having, you can consider the ears chew-free from now on.

Your very own
OvaGirl
xxxxx 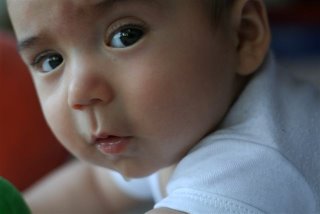 Oh, how I love your posts. I am so glad things are going well, and Tricky is positively edible. Good luck weaning yourself of his ears, I couldn't do it, i'm sure!

He is so very handsome!

oh oh oh, he is so gorgeous!

p.s. wanton ear nibbling is a parental prerogative until they're at least, ooh, eighteen

I love your letters to Tricky; they encompass every reason why I want so badly to be a mother myself in a way that I can seldom articulate. I am so very glad for the three of you, that you have each other.

Shards of sleep. Yes, indeed. On my shelf I have four books on getting baby to sleep through the night. I've not read them yet, but I will. After I get some rest.

You are such a wonderful photographer ... all the photos of Tricky come out some beautiful. Doesn't hurt that your subject matter is perfect, of course.

not really. he is gorgeous tho.

Hard to give up on ear chewing when he looks so edible. I admire the strength...xxx